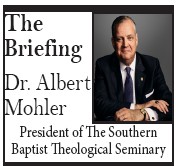 The human mind, the human moral imagination, and human language are inadequate to describe what took place in an elementary school in the small Texas town of Uvalde. A gunman we are now told was 18 years old entered that school intending to create and to commit premeditated murder and to bring about a massacre.

He killed 19 students and at least two teachers. Others are wounded. The staggering toll of these deaths underlines the fact that we now know this was the largest school-based mass shooting in Texas history. You have to go back in American history, all the way to 2012, and the killing of so many children, again, in an elementary school. That time in Connecticut, this time now in the State of Texas. The news is basically straightforward, at least in terms of what we know. What are we as Christians to think?

First of all, we have to think with immediate concern for the people there, the families there in Uvalde, Texas whose lives have been changed forever. Not just those whose lives were ended, those precious children and that teacher, but talking about the families there, the community there. Uvalde, Texas is a small Texas community. It’s less than a hundred miles from the border with Mexico. It only includes about 16,000 people. Some of them are a part of our own extended family. I’ve had the honor of preaching at the First Baptist Church there. There is simply no doubt that there are wonderful Christian people.

The guns didn’t kill. It was a human agent, an 18-year-old young man who in this case was the murderer. It was he who killed, but he did use guns. In a fallen world, we need to recognize that one of the perplexities is that the same gun that can kill here might protect in the next situation just across the street or even in the same place. We don’t want an unarmed military. We don’t want an unarmed police force.

And as you’re looking at this, that’s not an argument for gun control because

I actually don’t think that works. I don’t think it’s constitutional, but it does point to a deep moral problem. The same gun that can protect here can kill there. And furthermore, that gun that protects only protects by the threat of a lethal use of force. Here, Christians come along to say we live in a fallen world and that fallen world includes human beings with evil intent.

It’s hard to imagine evil intent, so evil as the young men who went into those elementary schools, one in Connecticut, now one in Texas, and carried out such murderous rampages against very young children.

It is just that crimes on this scale did not take place with this pattern, with this repetition in times past. And here’s where Christians come back to say, “Well, here’s something that is certainly true, human nature hasn’t changed.” So something has changed. One of the hardest questions for the United States of America at this point is trying to figure out what has changed and what we can do about it.

For the complete transcript or to subscribe, visit www.albertmohler.com/thebriefing.