SGA baseball goes 2-0 on the week 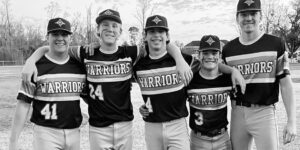 The Warriors snatched the lead late in the game in a 9-5 victory over Abbeville Christian Academy on Monday, March 7.

The game was tied at five with the Warriors batting in the top of the sixth when Jack Davis drew a walk, scoring one run.

The Warriors got things started in the first inning when Ty Williams doubled on a 2-2 count, scoring one run.

SGA put up three runs in the seventh inning, with the offensive onslaught led by Williams and Sawyer Franklin, who each had RBI in the inning.

Williams toed the rubber for SGA where the bulldog went four and a third innings, allowing five runs on five hits and striking out seven.

SGA tallied nine hits in the game with Franklin and Williams managing multiple hits for the Warriors. Williams and Franklin each collected two hits to lead SGA.

The Southwest Georgia Academy Warriors varsity baseball team knocked in ten runs in the third on its way to an 11-1 victory over Grace Christian Academy on Thursday, March 10.

SGA’s big inning was driven by singles by Williams and Banks Johnson, doubles by Jack Davis and Jaxson Haire, a walk by Bo Williams, a triple by Kole Kimbrel, a sacrifice fly by T. Williams, and an error on a ball put in play by Tyler Shierling.

Nate Akers led the Warriors to victory on the mound. Akers went five innings, allowing one run on two hits and striking out seven.

The Warriors scattered eight hits in the game. Kimbrel, Davis, and Johnson each collected multiple hits for SGA. Johnson, Davis, and Kimbrel all had two hits to lead the Warriors to victory.