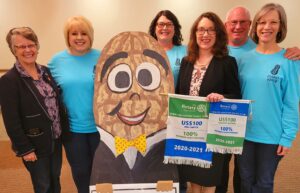 Peanut Proud, Blakely and Early County’s salute to the peanut industry, will stage its 14th festival on the Courthouse Square Saturday, March 26.

The group of volunteers leading the event told the Blakely Rotary Club on March 10 how important the festival is economically to this community, but also about its wide-ranging charity aspects.

In all of 2021, the organization sent 400,000 jars of peanut butter to food banks and groups doing relief work. And this was done without any administrative costs.

Making the presentation to Rotarians were co-chairs Mike and Sherri Newberry, Marcie Williams and Julie Jarrett.

“Peanut butter puts a smile on peoples’ faces,” Williams said. The public can participate by donating peanut butter in honor of special people. The cost of donating one case is $12 and recipients will be notified of the gift. Go online to peanutproud.com/donations

The festival begins early with a 5-K and Fun Run, with a parade set for 10 a.m. Some 110 arts and crafts and food vendors who have been well screened by the committee will have booths around the square. Despite this being an election year in Georgia, hopeful politicians will not be able to set up booths during the day, but are encouraged to walk the square and converse with attendees. The event concludes around 11 p.m. The group of festival leaders thanked city and county government employees for handling myriad duties before, during and after the big event.

Peanut Proud also thanked the Blakely Rotary Club for its help in assisting with the festival. Overall, it takes about 125 volunteers to produce the event.

Clay Walker made his debut in 1993 with the single “What’s It to You”, which reached Number One on the Billboard Hot Country Singles & Tracks (now Hot Country Songs) chart, as did its follow-up, 1994’s “Live Until I Die”. Both singles were included on his self-titled debut album, released in 1993 via Giant Records. He stayed with the label until its 2001 closure, later recording for Warner Bros. Records, RCA Records Nashville, and Curb Records.

Walker has released a total of 11 studio albums, including a greatest hits package and an album of Christmas music. His first four studio albums all achieved platinum certification in the United States and his greatest hits collection, and fifth studio album were each certified gold. He has charted more than 30 singles on Hot Country Songs, of which six have reached number one: “What’s It to You”, “Live Until I Die”, Dreaming with My Eyes Open”, “If I Could Make a Living”, “This Woman and This Man”, and “Rumor Has It”.

Walker was born in Vidor, Texas, to Ernest and Danna Walker The oldest of five children, Walker lived in Vidor with his father, who gave him a guitar when he was nine years old. Walker began entering talent competitions at age 15. After leaving his shift as nighttime desk clerk at a Super 8 Motel, he stopped at a local radio station to deliver a tape of a song that he had written. Although the morning disc jockey told him that the station’s policies prohibited playing self-submitted tapes, he played Walker’s song and said that it was “too good to pass up.”

After graduating from Vidor High School in 1986, Walker began working at a Goodyear Tire and Rubber Company plant. At 19, he also began touring as a musician, playing various local clubs, and eventually finding work as the house singer at a bar in Beaumont called the Neon Armadillo. In November 1992, he was discovered by James Stroud, a record producer who was also the president of Warner Music Group subsidiary Giant Records.

The Atlanta Allstars have an outstanding cast of superb musicians and vocalists. This band is geared to please any audience, ranging from hip-hop, to classic jazz and swing, from intimate settings to major events and concerts. Every member of this star-studded cast, is a seasoned veteran in all aspects of music, including musical productions and recordings.

The Atlanta Allstars consists of 10 outstanding musicians, with horns on occasion, and is fronted by the most incredible lead vocalist and entertainer in this business. The band also has two amazing female vocalists. With every member in the fabulous band also being vocalists, there are limitless possibilities for a song list. And this band takes full advantage of that fact. Festival-goers are encouraged to bring their dancing shoes.

The lead singer, Darren Leslie, is no stranger to audiences and event coordinators nationwide. He has graced the stage with some of the biggest names in the music industry, whether doing background vocals, being an opening act, or even being a member of the event.