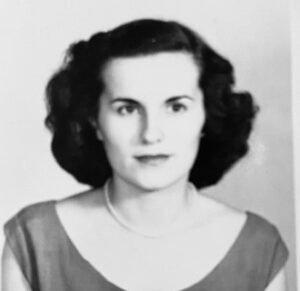 Peggy Ruth Scarborough Davis, age 90, passed away Monday, February 7, 2022 at her home in Webb, Ala., surrounded by her children. The children will journey to her favorite place on Bida Wee Beach to celebrate her life with hymn, prayer, and laughter. She will be interred at Pine Lawn Gardens, Blakely, Ga. in a private family gathering.

Peggy graduated in 1948 from Blakely Union High School. Her “School Day Memories” scrapbook revealed that she was elected FHA Historian, initiated into the Kappa Theta Pi sorority, and member of Tri-Hi-Y and Beta Club. “Rah-Rah-Rah for dear ole Blakely High” was chanted; “Hit Parade” was on the radio; the accordian was her musical instrument, and Seventeen magazine was the rage. Peggy attended Huntingdon College in Montgomery, Ala., for two years then transferred to the University of Georgia where she served as Homecoming Court representative and sweetheart for the Alpha Gamma Rho Fraternity… marriage, a move from Arlington, Ga., to Lackland Air Force Base in San Antonio, Texas, and the birth of her children was soon to follow. Peggy lived most of her life in Early County before moving to Alabama after the death of her husband.

Peggy was a member of the First Baptist Church. She was born in Blakely, Ga., where she spent many years as a homemaker and nine years as a youth development worker at the Regional Youth Development Center located in Blakely. Peggy enjoyed spending time with her friends on the golf course, especially playing in the many tournaments held nearby. When she could no longer play, she enjoyed following her favorite players especially her “Bulldog favorite,” Bubba Watson. When Peggy wasn’t working or on the golf course, she enjoyed crafting- ceramics, woodworking, sewing, and decoupage. Some of her pictures were sold in gift shops along the coast. She enjoyed making jellies, preserves, and relishes for her family. Peggy’s love for her children and grandchildren was abundant. She enjoyed many years spending time with the children at her cottage at Bid-a-Wee in Panama City Beach, Fla. where her neighbors became life long friends and many happy memories were made.

To honor Peggy’s memory, the family requests that donations be made to the First Baptist Church, 790 South Church Street, Blakely, GA 31723 or to your local animal shelter or a child in need. It is the family’s wishes that you choose your own special way to honor Peggy remembering her positive spirit, grand smile and sweet laughter… may you share in her love for God and family.