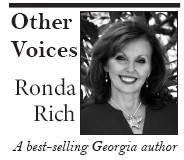 A decade ago, I launched a new book with a tour that, with three exceptions, took me to large Southern cities and three small Mississippi towns.

After an early morning show in New York, I stopped to have breakfast at a Jewish owned delicatessen, one of my favorite places. Eyeing the menu, I was jolted by an item.

“Grits!” I exclaimed to the waiter. “ You have grits?”

“I’ll have a bowl. I want to know how New York City grits taste.”

“We’re sold out. Every morning, he makes a big pot of grits and they go fast.”

It took four more trips before I had a bowl of New York City grits. They were watery and half-cooked. An imitation.

For truly perfect grits, visit The Lodge or The Cloister on Sea Island. They make their grits with real cream and they’re purely scrumptious. They’re also in Georgia. The location where Southern food is served makes a difference.

In Nashville, I stayed in a nice hotel near Vanderbilt. I returned to my room after doing early morning radio and television and ordered room service. Since the grits episode in New York, I decided to order Southern delicacies at every stop and judge.

I ordered “Southern Buttermilk” biscuits with sausage gravy. It may have been the worst Southern food I ever tasted. The gravy was pasty and tasted close to the Elmer’s Glue that I tried when I was seven. The biscuits were dry, dusty, and barely chewable.

Down to the restaurant manager, I called. “Sir, these are the worst biscuits and gravy I’ve ever had.”

“Please, tell me that there isn’t a Southern woman in your kitchen who makes buttermilk biscuits like this. It has to be a man or a Yankee.”

He inhaled deeply. “It’s a young man. From Argentina. He’s trying his best to go by a recipe.”

“Argentina??” I exclaimed. “ You have one of the top hotels in one of the South’s best cities and you’re letting someone from Argentina make your biscuits and gravy? Let me talk to him.”

The young man came to the phone and, as best I could, I gave him advice.

“ You’re usin’ too much flour in both the gravy and the biscuits.” I told him how to cut in the shortening and to work the dough quickly. He responded gratefully. He had been under fire.

The manager came back to the phone and expressed his appreciation. “We’ve had so many complaints that we were going to take them off the menu.”

“What flour do you use?”

In Birmingham, I found impressive biscuits and gravy at a family-owned diner in Homewood, which, sadly, has closed. In Clarksdale, Mississippi, at the blues club, Ground Zero, co-founded by actor Morgan Freeman, I discovered the yummiest “sammich’ made with Southern favorites: pimento cheese, bacon, and fried green tomatoes.

A delicious version of this sandwich used to be on the menu at EP’s Bar and Grill at The Guest House at Graceland (be careful not to drop “The” or “Graceland”or you will get a note of chastisement from Graceland’s unpleasant public relations company).

Several weeks ago, I was in Memphis and craving that sandwich. I made a special trip to EP’s, only to be told, “We have a shortened menu now. I don’t know why that was taken off because a lot of people ask for it.”

I think Elvis Presley would be unhappy about that. He believed in giving the people what they wanted —not what he thought they should have wanted.

As for the biscuits and gravy in Nashville, I learned this: Imitation is not always the highest form of flattery.

Ronda Rich is the best-selling author of What Southern Women Know About Faith. Visit www.rondarich.com for her weekly newsletter.