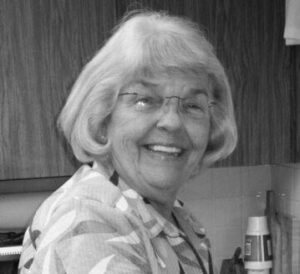 Fay Jarrett Naramore, the second child of Etta Mildred and Clay Jarrett, was born on December 13, 1933 in the small town of Blakely, Ga. At some point in primary school, Fay decided that her name would look much better if it had an “e” at the end – like the other Faye in her class – so she changed the spelling, establishing early on that she had her own way of doing things. As a young person, Faye was a good student, aside from a lone “D” in Interior Design class; a beloved sister and daughter, although her family once moved to a new house and forgot to tell her; and a hard worker, always ready to dispatch a neighbor’s chicken for the extremely reasonable rate of 5 cents per bird.

She married James Earl Naramore, a tall, dark, and handsome ex-Navy man. Together they had two children, Steve and Donna, and attempted to start their own farm, which surely would have succeeded were it not for an unprecedented drought. Jim reenlisted in the military, this time wisely choosing the Air Force so as to avoid another stint in the engine room of a destroyer circling the South Pacific.

When Jim deployed to Europe, Faye and the kids followed. Faye spent her 20s living abroad in England, France, Italy, and her favorite country, Portugal. After the family returned to the U.S., Faye and Jim moved to California and Florida, where Jim retired from the military and joined the Civil Service. Faye held multiple jobs in many different states – telephone operator, armaments factory worker, and real estate agent, among others – and enjoyed many hobbies, most notably running. Her trophy collection was sizable and a great point of pride, especially because she was often the only woman racing in her age group.

In 1985, Jim and Faye retired to Titusville. Faye maintained a busy social schedule throughout retirement. She was a member of Unity Church, an avid line dancer, an occasional clogger, member of a local Red Hat Society, and a volunteer with the Parrish Medical Center Auxiliary. She loved hiking, sewing, crafting, and traveling around the U.S. She spent countless hours with her grandkids and loved being their “Nanny.” Throughout her life, she maintained the positive attitude, quick wit, warmth, and humor which endeared her to all who knew her.