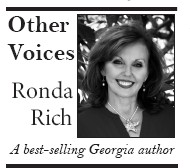 Often when traveling, if someone learns that I’m from Georgia, they will ask, “ You’re a Georgia Bulldogs fan?”

I reply – this is the unvarnished truth – “I’m an SEC fan. I pull for all the SEC schools and, truth be told, I have a special spot for Kentucky and Vanderbilt during football season.”

Of course, I grew up with a particular affection for the Bulldogs. I still have the tiny – and somewhat brittle – black sweatshirt in a toddler’s size-three that is emblazoned, “Georgia Bulldogs.”

As my experience and friendships grew, I found a reason to pull, at one time or the other, for Southeastern Conference teams. I have deep affection for the state of Mississippi. A favorite afternoon once happened on the Ole Miss campus where I watched Archie Manning walk through The Grove toward his tent where his family tailgates.

I spoke at the Mississippi State journalism school. Mama was with me and, as we drove around the lovely campus, I developed a lasting affection for the Bulldogs and that which the school has contributed to our country’s agriculture.

Tink was on a video business call last fall. I bounded up the stairs and stopped at his office door. He looked up from his computer screen.

“I have something important to tell you,” I whispered.

He nodded, paused the call and looked a bit concerned. “What?”

I was excited. “BOTH Kentucky and Arkansas are 4-0 to start the football season!”

He was incredulous. “THAT is what is so important?”

“It is to the fans in Kentucky and Arkansas. This is big news!”

But, when it comes down to it, I will always have special affection for the Georgia Bulldogs. It’s personal. It’s unique. It is heartfelt appreciation that I will carry to my grave and never cast into a lake of forgetfulness.

By both accident and good fortune, I became the first female sports reporter to cover Southeastern Conference football, full-time. It wasn’t by design. It wasn’t to make a statement. It was simply to do my job.

Trying to dig myself off the obituary desk and other mundane assignments, I gratefully grabbed a newly created part-time sports position – until then, there was one full-time sports reporter/editor – at my hometown newspaper, The Times, in Gainesville, Georgia. I knew little about sports but no novice ever applied herself more energetically to learning a trait.

I covered high school sports as well as the Georgia Bulldogs and Atlanta Braves, sporadically. The Bulldogs’ coverage became wildly popular so, within a year, I was covering them full-time, the only female, regularly, on the practice field, the sidelines, and in the press box.

Those men – let me admiringly call them “gentlemen” – did not roll their eyes when I appeared, normally attired in a dress and, always, in heels. They showed no contempt that a young girl had invaded a men’s club, nor did they laugh, even smile, at a half-baked question I asked.

Importantly, they did not patronize me. In fact, they equalized the field. In the third quarter of each home game, Felton went down to the press box and asked which players we reporters wanted to interview. At the end of the game, Felton assembled those players in a common space, outside the locker rooms, where I had equal access to each player.

Society, politics, or law did not push them to this experience of equality for me. They did it because they were decent humans, courteous Southern gentlemen, and no respecter of certain people. There was not a male chauvinist among them.

During the recent National Championship game, I saw my beloved “Dooley” – that’s all I call him – standing on the sidelines. I smiled.

When they claimed the championship, I applauded .

Young or old, I will always be loyal.

Ronda Rich is the best-selling author of What Southern Women Know About Faith. Visit www.rondarich.com for her weekly newsletter.